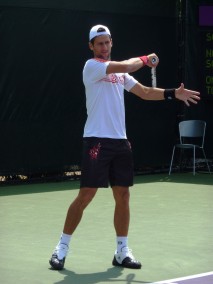 Novak Djokovic and Andy Murray will contest their fourth-round French Open matches on Monday. They are set for respective showdowns against Frenchmen Richard Gasquet and Jeremy Chardy.

Djokovic and Gasquet will be meeting for the 12th time in their careers at the ATP level when they clash in round four of the French Open on Monday. The head-to-head series stands at 10-1 in favor of Djokovic, who has taken their only two prior clay-court encounters. He prevailed 6-4, 6-4, 6-2 in the same round at Roland Garros in 2011 after previously triumphing 7-6(7), 0-6, 6-1 in the 2007 Estoril final. The two competitors have not faced each other since the 2013 World Tour Finals, where Djokovic got the best of Gasquet 7-6(5), 4-6, 6-3 during round-robin action.

Aside from the fact that Djokovic has never won this event, there is not much to…