Is Tennis Dying in the US? Part 1

Is Tennis Dying in the US? Part 2 – Prognosis Negative

Places like The McCallie School in Chattanooga, TN have great facilities and more importantly have a lot of great people teaching and promoting tennis.  Tournaments such as the Derby City Championships present the health of high level junior tennis.  My basic sense is that adults are playing tennis in pretty good numbers, but that junior tennis has lost a lot of mid-level players in the past 25 years.  We still have really strong juniors and have novices who are trying to be involved in the sport, but too many players transition out of tennis before moving beyond basic skill levels. 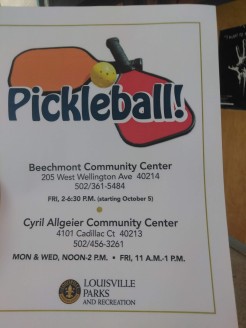 I took these photos at a Louisville Park that used to have two sets of tennis courts.  One group of them was redone and made into a miniature soccer field and three very nice pickleball courts.  The two tennis courts at this park are not used a great deal.  I spoke to pro who rents one of the courts to teach lessons.  He noted that many days he is the only one to use the courts.  He also noted that he is generally booked solid with lessons so at least one court is getting good use.

Therefore, while I lament the loss of public tennis courts, if two are sufficient for that park, re-purposing the other courts into pickleball and soccer spaces is hard to object to.  I recently heard a long-time tennis player say, “Pickleball is evil.”  His friend, another long-time tennis player countered that it can help with net play and reflexes.

I tend to side with the more optimistic tennis veteran that pickleball can be a bridge sport for people to perhaps become curious about and eventually take up tennis.  This bridging will likely only hit among adults, but I did hear a strong junior player talk about how much he likes pickleball.  So long as the bridge is not just a one-way street for tennis players losing their mobility to find a new sport with a net, I think pickleball’s growth is a good development.  It can be an opportunity to grow tennis.  The tennis community in the US just needs to be savvy enough to take advantage of that opportunity.